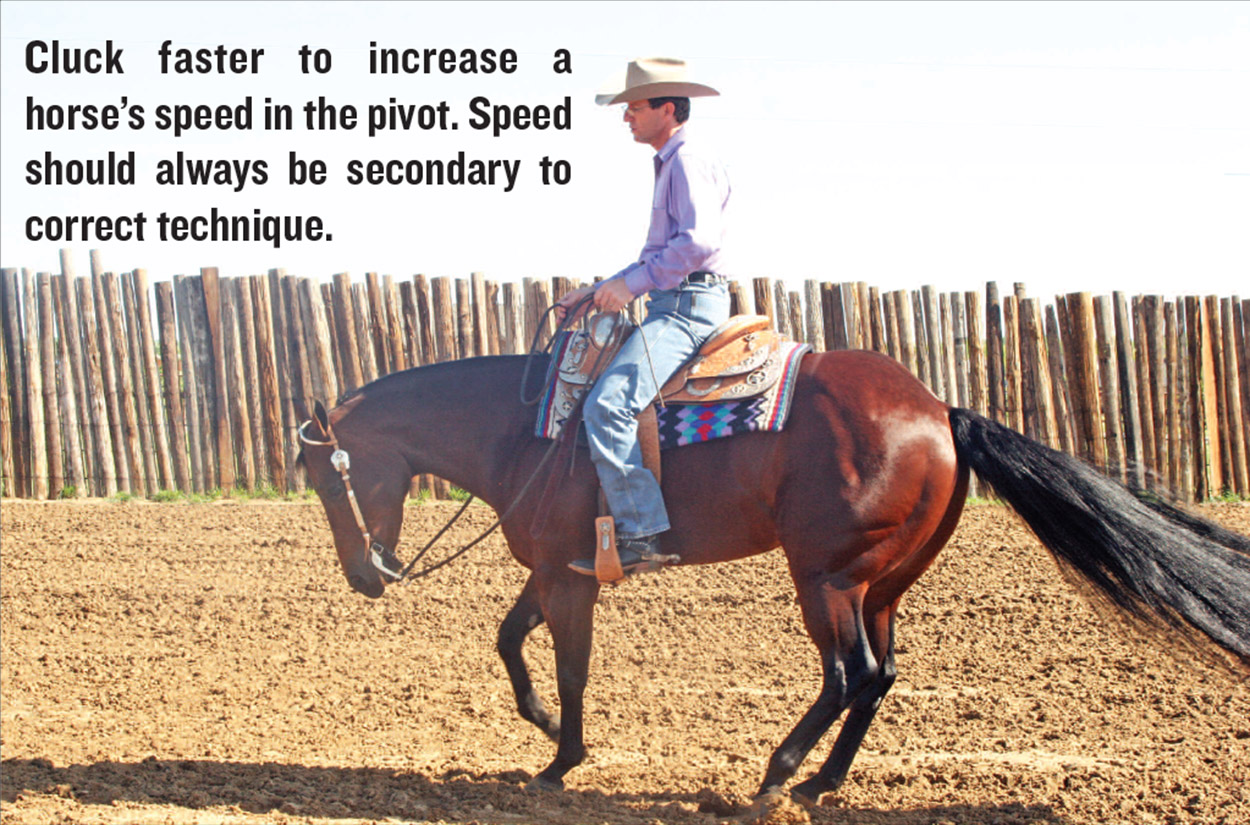 Sit Square to Turn Around

Use your legs, hands and voice to perfect your pivots.

Show horses need to be able to turn around.  It’s a foundation skill that they will use in all events, including showmanship, horsemanship, trail, equitation, reining, cutting and working cow horse.

You can improve your horse’s pivot by sitting squarely and applying these principles every time you ask your horse to turn around.

What’s in a Pivot? 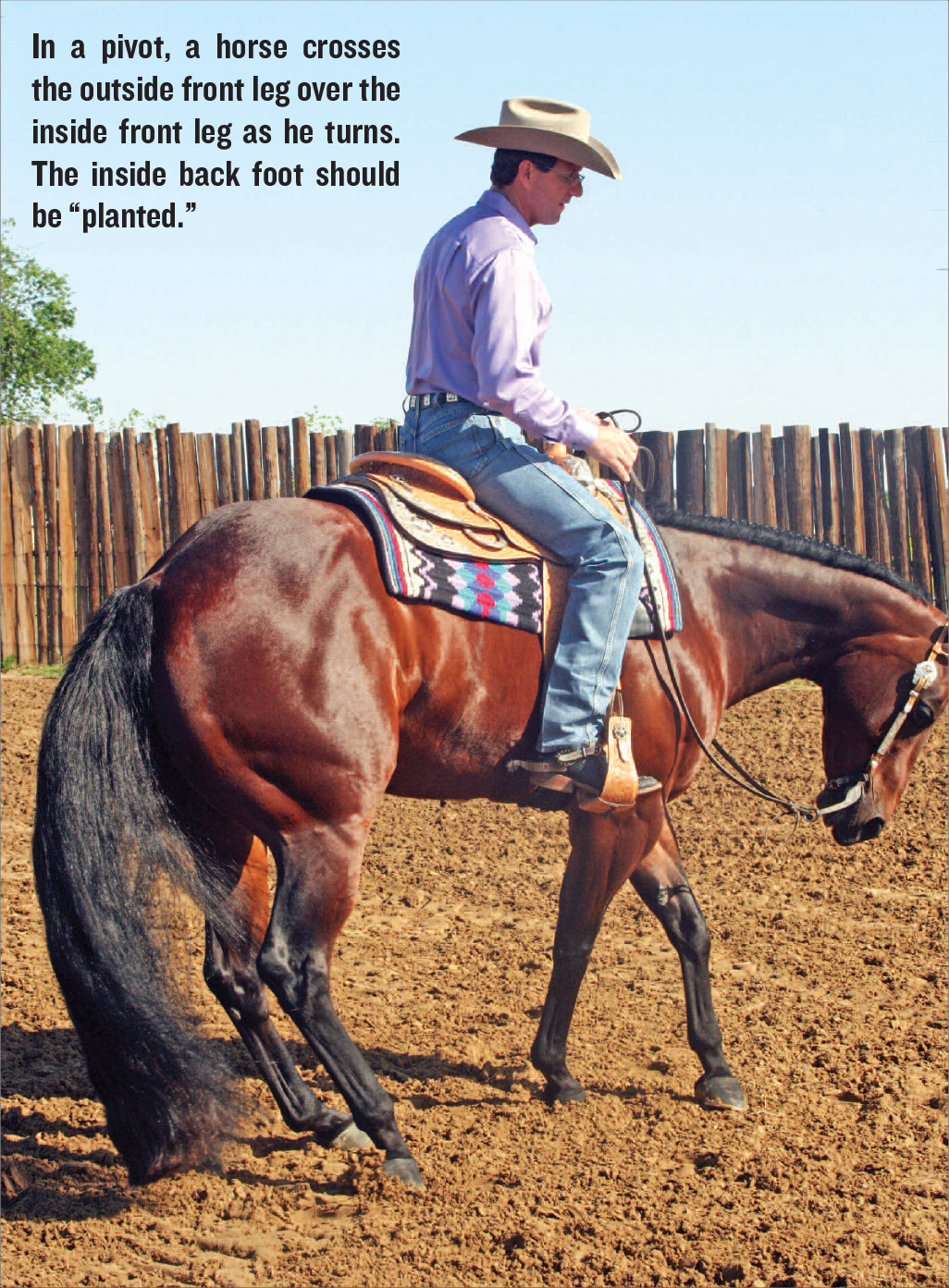 Before you ask for a pivot, you should know how one works.   A pivot is created when a horse lifts his back and uses forward motion to cross an outside front leg in front of the inside front leg as the horse turns around in a complete circle or more than one.

We look for a “planted” back foot, but it’s not really planted, because a horse will shift his weight on that foot as he turns in a circle.  What “planted” means is that the foot  doesn’t move as much as the other back foot, which is also shifting, though more visibly.

The horse’s body remains square.  His head looks in the direction he’s turning and the rider is square in the saddle.  There’s a tiny arc in the horse’s body.

When I teach the pivot to the horse, I begin at the trot, which has  a nice cadence that makes it easier for the horse to cross his legs.  I start working for one crossover step.  After I get one step, I try for two.  After I get two steps, I try for three.  Going inot the pivot, I want the horse to be athletic, to drive his rib underneath himself and to lift his back. 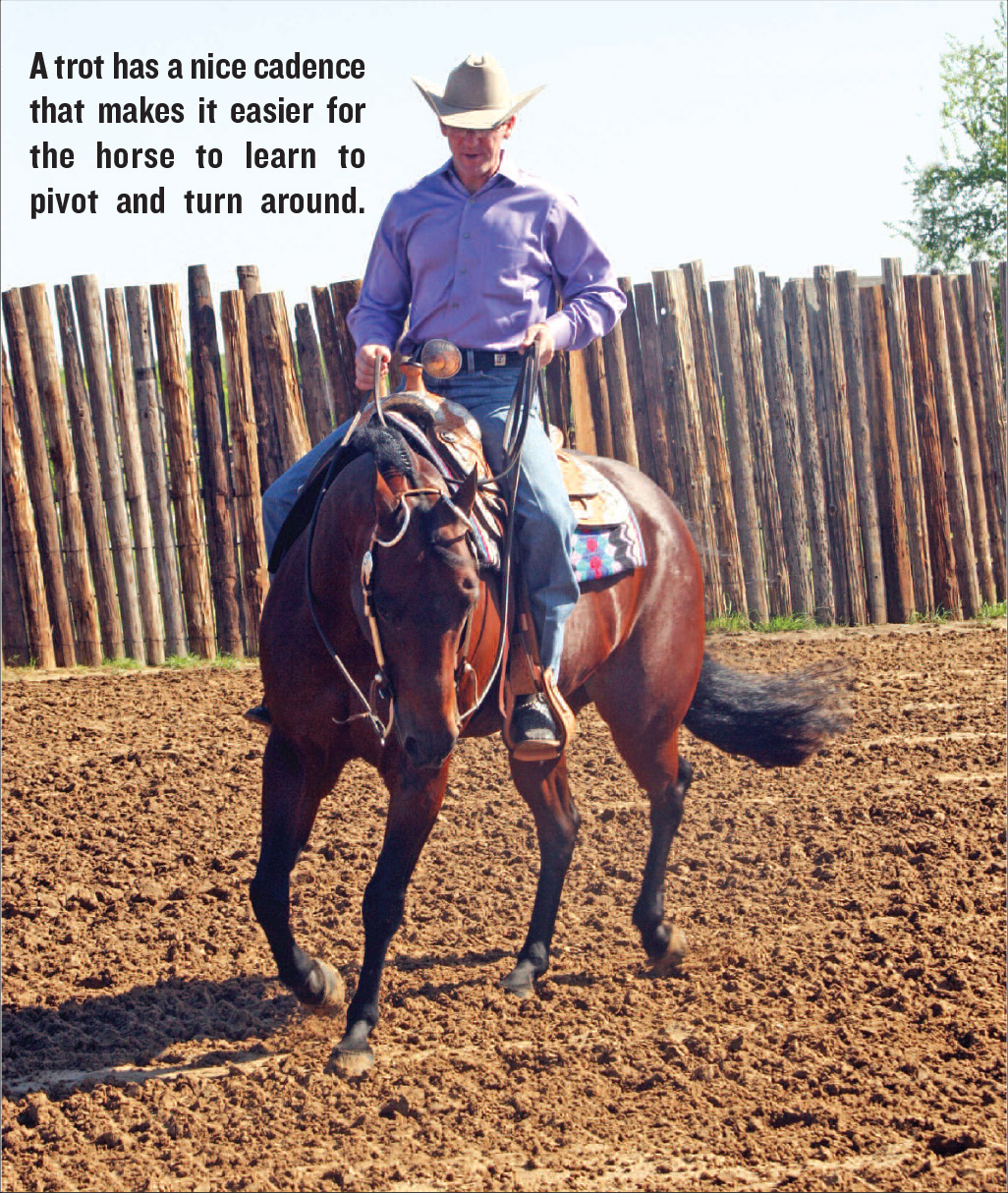 My goal is to make the true pivot the actual release.  The horse has to use his body and back so much going straight that it is easier to come around in the pivot than it is to drive forward and really use his body. 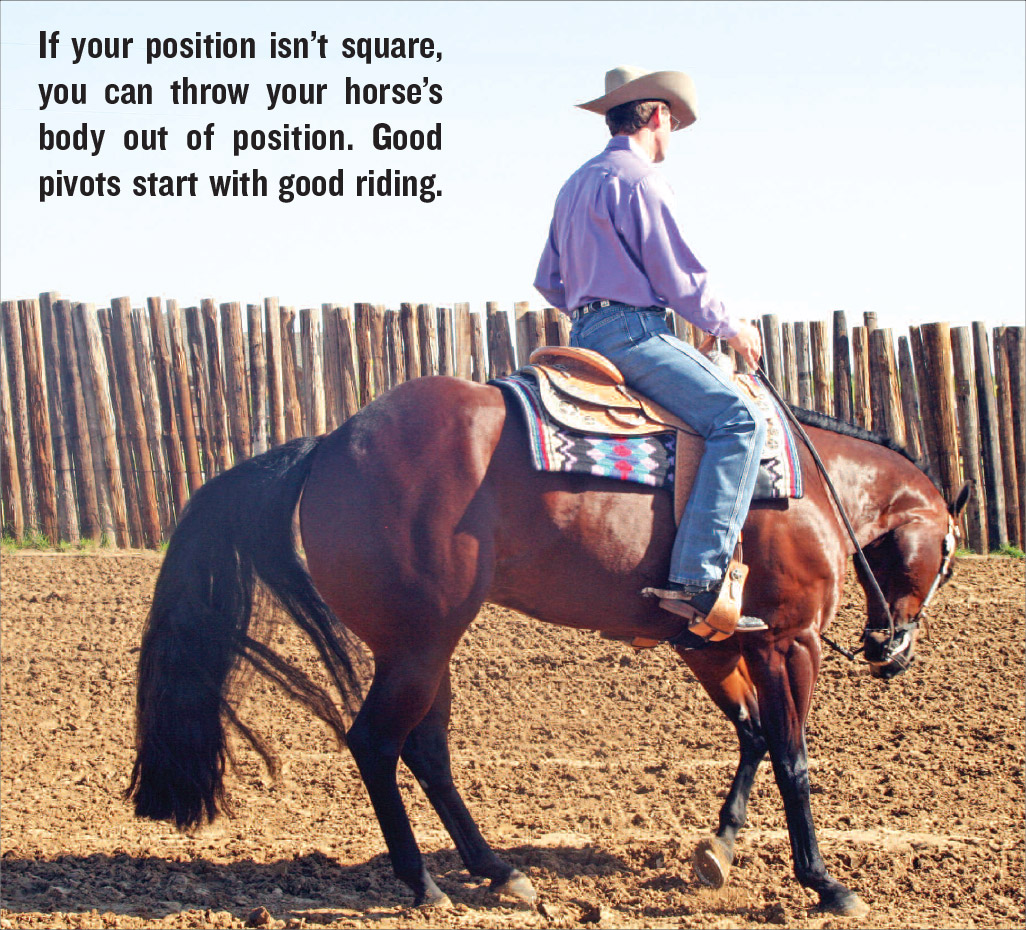 It’s not fair ot ask the horse’s body to be square when your body is crooked.  It’s a partnership, and your part of it is that you’re sitting square on your horse when you enter the pivot.

If you lean out, you push your horse’s body the other way, forcing him to drop his stomach, which means he can’t pivot correctly.  if his stomach has dropped, then his back has dropped as well.

When you neck-rein, make sure your hands don’t cross more than 1-2 inches past the horse’s center line.  Pulling harder on the outside rein will only put your horse’s head out of position.  if you start with a mistake like that, you’re going to find it hard to get back into position.

Part of pivoting correctly is making sure your horse is in proper physical condition to pivot correctly.  his back needs to be strong enough to lift and turn around.  Even if a horse knows how to pivot correctl, he might need reconditioning if he has had some time off.

You can condition your horse by trotting him a lot and lifting with your legs, using leg-to-and cues, driving your horse into the bridle, then stopping and doing it again.   Trotting circles and changing directions, asking him to stop and do a rollback, and building his muscles will be more effective than asking him to do several pivots in a row.  He won’t be able to do it correctly, and you’ll both become frustrated.

Build him up slowly.

If I’m teaching my horse to pivot to the right, the first thing I’m going to do is lay the left rein against the left shoulder.

Then I pick up his body with my legs and hands and ask him to pivot.  I’ll add slight pressure with my outside leg and open up my inside leg to give him somewhere to go.

My horse looks to the right, where he’s going, and his rib is underneath him.  His back is square underneath me, and I’m sitting square on his back with my hips squarely under me.

Everything is leg-to-hand.  You want the leg to be the first thing to move.  So if I want to turn right, I close my left leg and open my right.  I tell him I’m going right with my hands.  I have my gas in my legs, I have my steering in my hands, and my cluck sends the horse around. 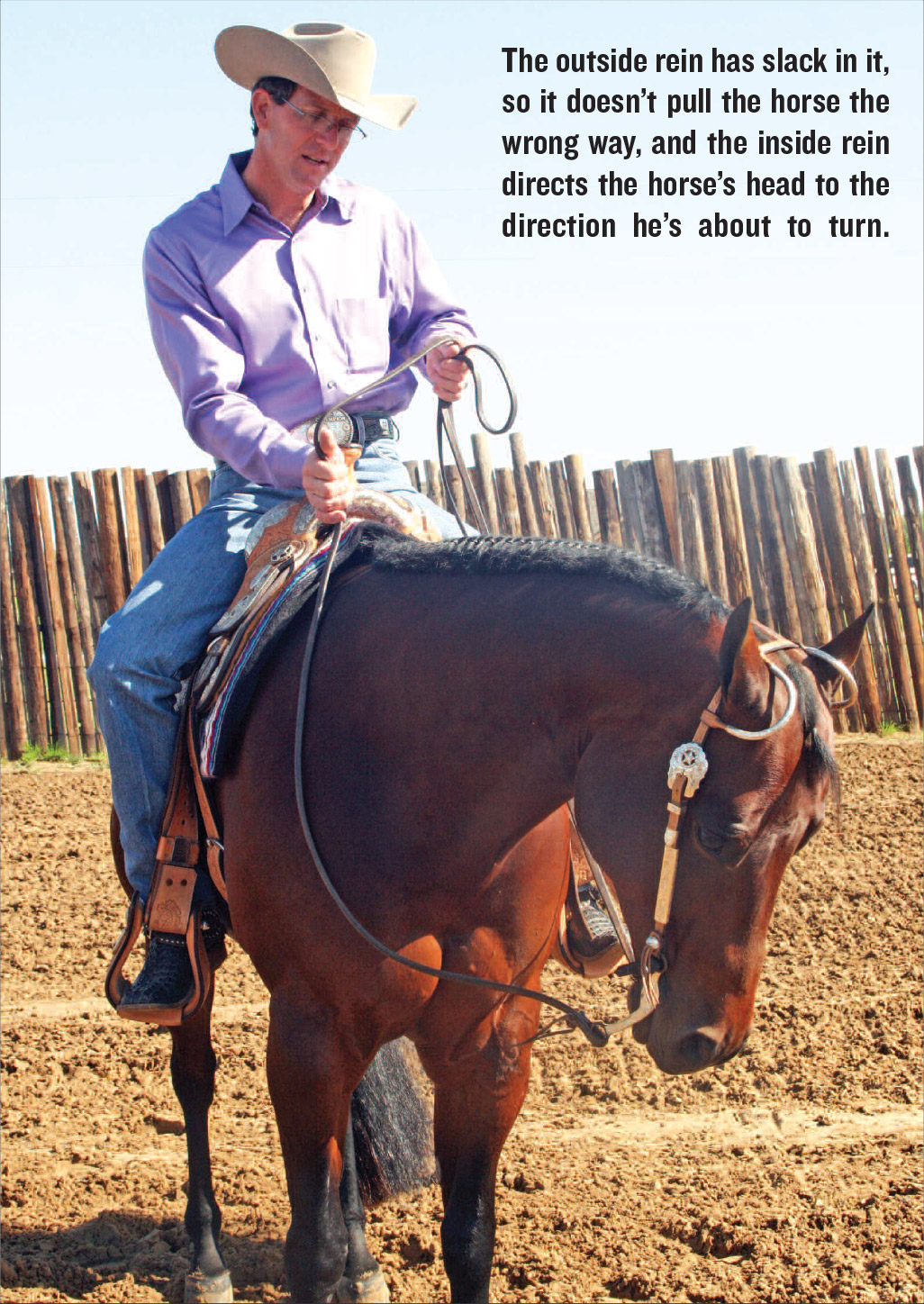 I use a lot of voice command.  When I want my horse to move his feet, I clock to him.  If I want him to go faster, I cluck faster, and if I want him to slow down, I cluck slower.  The horse follows my voice, I cluck ever time a front foot moves.  It takes practice with your horse to feel every time a foot hits the ground, but it’s part of becoming a better rider.

The brake on the pivot is hwne my hand goes straight and I stop clucking and open my leg.

In the horsemanship, many patterns ask for speed control within the turnarounds.  To me, if you push harder with your foot to make it happen, you might make the horse bend the wrong way.

As a judge, let me emphasize that speed is not as important as correctness.  I would prefer to see a horse spin a little bit slower and have proper form to function when he’s doing things than to do things fast but incorrectly.

If a horse has correct technique and is athletic, the speed will come easily.  It’s harder for a really athletic horse to spin slowly correctly than it is to spin fast incorrectly, because the athletic horse will have to focus on every step he takes.

A lot of horses we see in horsemanship these days are spinning around the middle of their bodies instead of on their haunches.  It’s fast, but it’s not really correct. Make sure your form is proper before you add the speed. 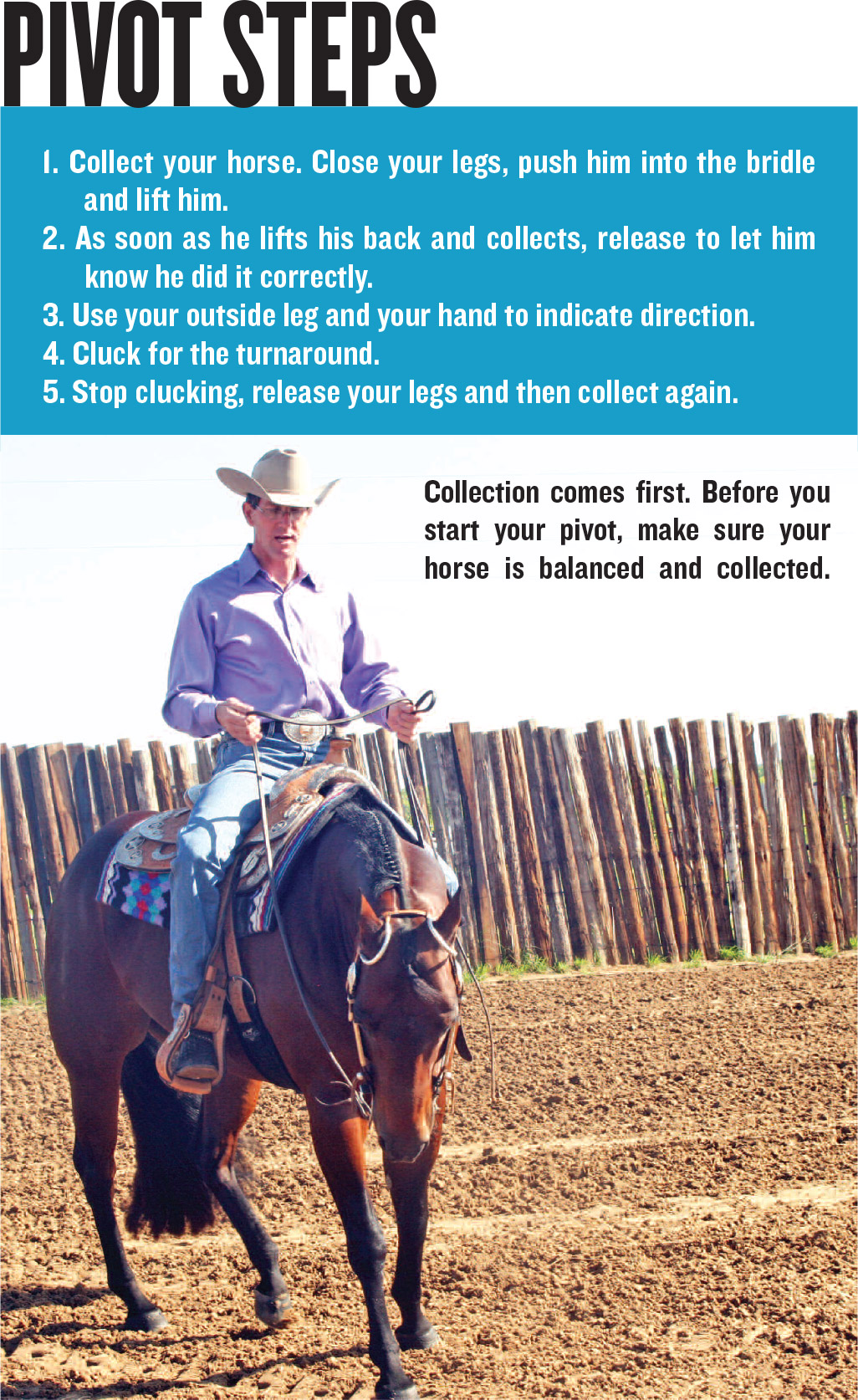